Jurgensen - Be Still My Heart 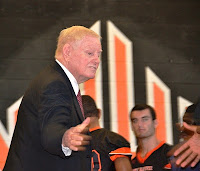 Believe me; I understand this seems nuts.   I can blame the Sudden Cardiac Arrest (SCA), but truth be told, this long pre-dates that 2009 event.  More truth - I don't care.

Sonny Jurgensen was my first crush.  I know, I know.  Yes, this was the start of my long, dark road of exceptionally poor taste in men.  Sonny was an intermittent attender of my childhood Philadelphia church - St. Matthias. (That's a post for another day; Matthias was the apostle who replaced Judas in the lineup).
Sonny would show up  from time to time during the Eagles football season with his pal, favorite receiver and co-future-inductee into the Hall of Fame - Tommy McDonald.

Sonny was an adorable, dynamic, charismatic, witty, sharp-edged, full-of-vortex, jagged,  tortured  heavy drinker.  Just my kind of guy.  Sonny was magnificent on the field, and a bit spotty off the field.  I adored him.  In college, the only photo I had in my room was one of him and my beloved godfather Bill J.   Well, I might have  had one of the dog.  Like I said, I understand this is nuts.

I was shocked in 2009 when I moved here (no pun intended re: Skippy the implanted defibrillator) - he grew up in my adopted home town of Wilmington, NC.  Went to high school here.  The city field is named for him; I begged a photographer friend to take a photo of the Jurgensen scoreboard last year; it's enlarged, framed and inside my back door.

This week, Sonny was honored at his high school by the NFL Hall of Fame "hometown heroes" program, whatever the hell that is.  I saw a small announcement in the paper of the upcoming ceremony and had to go.   Just had to.  Wilmington is a big small town, unlike any place I have lived.  So when I called the school to find out what I had to do to be able to attend - the Athletic Director called me back and welcomed me in.

Sonny was charming, gracious, humble, and talked to his true audience - the high school football team assembled on stage that morning.   He talked about promise and possibility, as all speakers at a High School do.  But then he also told them he was far from the best athlete in his class.  He told them he had been a member of the boy's chorus, had played a role in the Mikado.  He then burst into song, mimicking his performance with the fan.  Seriously.
I fell in love with him all over again.  He was a delight.

I met Sonny Jurgensen this week.  I shook his hand; he shook mine.  I got a demi-hug.

Life is to be gobbled.  I don't give a damn if I looked like an ass.  I met Sonny. 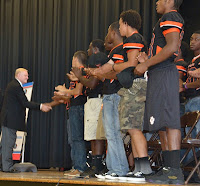 How Things Should Be 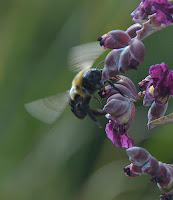 "He was meant to be a photographer; he had that sense of  how something  should  look".  I love that sentence.  It's not mine.  It belongs to David Nicholls who wrote "One Day", a clever novel.  It's a wonderful sentence that reminds me of someone.

I am not an excellent photographer, though occasionally I take a picture I like.  And more rarely, I may take one I like enough to keep carefully, maybe print.  I don't have Nicholls' sense - my good photos are happy accidents.

Hearts should not stop without warning, no one should have to come up with a cute name for an implanted defibrillator so that it's less terrifying,  kids' bones should not break,  children shouldn't get ill, friends should be kind to one another.  That is how things should be.  We should be kinder to people we care about than we are to near-strangers.  Though admittedly, sometimes it is safer to show the kindness to those mere acquaintances.   It's just as true for me as for him;  there is far greater risk in kindness with people we are coming to care for.  Kindness with near-strangers is just a pleasantry;  kindness with loved ones creates vulnerability.

Pictures are lovely.   Life is messy.