The Things We Name 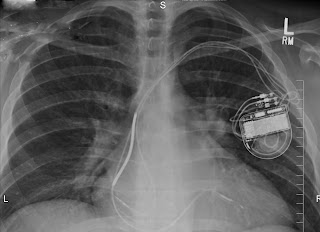 We name hurricanes;  we do not name tornadoes.  Many of us, if not most of us, name our implanted defibrillators.   Their technical and proper name is implantable cardioverter-defibrillator (ICD).  Sigh.  We lighten that up a bit.
I used to think we named hurricanes because each is with us a relatively long time; we watch their development from tropical depression to storm to adulthood.  But if it were just for keeping track, we could simply number them each year.  We name them instead;  I think we have our reasons.

I  think it's essentially the same reason we name our ICD's - to anthropomorphize them, to de-mystify them, and mostly to dis-empower them.  We want to see the ICD's as pets, as family members --- as anything but what they are.  Anything but some foreign object sitting there with wires into my heart.  Wires that will 'defibrillate' if my heart stops beating again.  Translation = shock the crap out of me.

That first day after the Sudden Cardiac Arrest (SCA), it is hard, hard, hard to digest this whole, new story.  To process it into something we can live with without being breathlessly terrified.   (I wish I could say I was proud of how I worked through it, but I believe I lacked grace.)  When I came to and they told me I had SCA, that my heart had stopped and that I was lucky to be alive, that I had gotten three shocks with the big-boy defibrillator paddles to restart it --- when they told me this, I think I gracelessly said something like  "What the F are you talking about?  Are you in the right room?"

We SCA survivors all grapple with it -  "what do you mean my heart just stopped beating?  And had to be shocked back?  Did I die?  Am I going to die again now?".   Then we hear the statistics - 95% + of people who have SCA die that day.  We can't breathe with that one.  We have tests, scans, bad food, terrified visitors.  I had so many questions that I couldn't formulate a single question.  I didn't understand why I didn't feel sick. Those 4 days in the hospital are a haze. I remember pieces, and I'm sure I have the sequence wrong.  Purely one foot in front of the other.  Friday you are a normal healthy person; Saturday your heart stops for no reason.  And somehow you survive that.  You slog through that. One beat at a time.

I gave consent for the ICD I had never heard of before; I gave consent to this thing going into my chest and into my heart.  It's in there forever.  It may or may not shock the stuffing out of me one day.
But on the night it was implanted, all I wanted  - and I wanted it desperately -- all I wanted was for this "it" not to be an "it".  This was a part of my life; I had a new body part.  I needed "it" to be a he or a she or a me. The next morning, I began searching for names --- I wanted a benign name.  Something I could handle, something that might make me smile.  Something that might make other people laugh.  Something I could live with.  Something that wouldn't terrify me.  And Skippy was born.  Skippy doesn't sound like a scary ICD;  Skippy sounds like a puppy.  Skippy will help; Skippy won't ruin me.  Skippy will be like Lassie.   Sort of.  He is my dis-empowered defibrillator.

I have since learned that many, many people feel this same need to humanize their ICD.   I have met (or e-met) people who have come up with an astonishing array of names:  Timex, Elizabeth, Popper --- and my all time favorite - Trigger.  I love these people, and I love the names.

I've got a roommate.  He lives in my chest wall.  Tornadoes are always destructive.  Hurricanes - sometimes they destroy and sometimes they don't.  The named storms are not always ruinous.
Posted by Marty at 7:17 PM 4 comments: 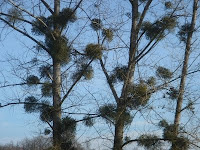 I learned a number of things from a driver, and virtually nothing about driving.  One involved cigarettes and gasoline, but the best may have been the mistletoe.  I'm not sure where I had thought mistletoe came from - I probably assumed it grew on mistletoe trees or mistletoe bulbs or mistletoe shrubs.  I have a shocking lack of curiosity about such things so am not surprised I had never asked anyone or looked it up.  And I had never noticed those odd ball-like things in winter trees - such is life among  the amazingly unobservant.

But I'm educable; I learned what mistletoe was and then more surprisingly, how people retrieve it.  At least here in the south, they shoot it down.  Seriously.  With guns.

So mistletoe is a hemi-parasite.  Our cultural icon of Christmas sweethearts - parasitic.  It lives off its host.  I was shocked to learn that those weird little balls in the trees were mistletoe; the driver was more impressed with the shooting of it.  Figures.

I still wouldn't toss a lit cigarette into a gasoline puddle, no matter what the redneck on YouTube says.  Regardless of his demonstration, or semi-scientific assurances.   Nor would I shoot at mistletoe. But it's been quite a while since I learned that's where mistletoe comes from; I long ago quit trying to understand the driver.   Hemi-parasitic bare-tree balls of Christmas kissing icons that are waiting for their end-by-firearm - they are ever so much easier to understand. 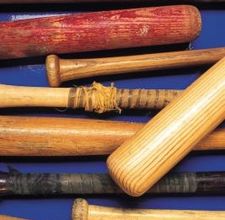 Some things are simply not right.  What is right is that it’s Spring, though the weather will be on and off for a bit yet.  It’s Spring because the Phillies are playing in Clearwater and college baseball is underway.  What’s right is the ball field grass is green; it gradually becomes somehow impossibly greener under the lights; my heart is still beating and Skippy the implanted defibrillator continues to be quiet.
And then there’s what’s wrong.  Pales in comparison to the harbingers of Spring, heartbeats and Skippy, but still just wrong.
Designated Hitters.  Pitchers should hit.  As someone said, using a DH is like sending someone else in to a basketball game to shoot free throws.  Wrong.
My thirty-something year old friend who lives with the aftermath of Sudden Cardiac Arrest (SCA) and  her version of Skippy.  Too young.  Not right.  Ever.
I get annoyed when I have to explain that I didn’t have a “Massive heart attack”.  Somehow, I prefer my reality of  the far less common and more dramatic SCA, though that is mighty small of me.  After all, before 9/5/09, I could not credibly have described the difference between a heart attack and SCA.  I’m wrong to get cranky about it, but I can’t seem to help myself.   My cholesterol was never high, thank you very much.  Small.  Small.
Aluminum bats in college are wrong.  Actually, I think they’re wrong in high school and probably Little League as well.  The sound of a baseball bat should be a crack, not a ping.
Mitt Romney in worn, broken-in jeans.  Very high ick factor.   And I don’t believe it.  Where is he getting them?
A favorite photo is ever so slightly out of focus.   There’s a new camera just developed (lytros) that will fix that, but too late for my shot.
The wrong man calls.   Of course, the 'right' man is also a wrong man,  but that's just me.  I was thinking of writing a country song "He was the answer to the wrong question".   Another day.....
Writing a post like this after my extraordinary good fortune is wrong;  my heart stopped and I didn’t die.  This uncharacteristic whining reminds me of one of my favorite birthday cards ever created.
- -   On the cover are two women.  One grants the other a single wish and the birthday girl says "Thinner thighs".  The wish-granter rages - really, all the problems in the world and that is what you selfishly ask for - thinner thighs??????
- -   And inside the card, the birthday girl responds.  "Okay, okay.  Thinner thighs for everyone".
And there you have it.