SCA Changes Everything - Our Yes and Our No 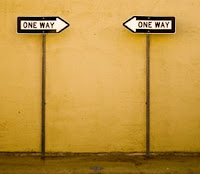 At first, I thought living through Sudden Cardiac Arrest (SCA) would change nothing. I won't let this change anything.  I am still healthy and strong. I am not old, and this -- this --- this ----event ---won't change me. As if one could will this to be true.

Time goes by, the initial shock, terror and horror pass.  We come to terms with the fact that by all rights, we should have died that day - over 90% die that day.  Then some of us get to come to terms with the joyous but incredible understanding that we had no heart damage and no brain damage - rarity among the rare. We didn't die, our brains and hearts are intact.  Again, I think - I will not let this change me.  Period.  I just won't permit it.

I look back with wonder at how absurd I was.  Every one of us who lives through this is utterly, completely changed. I don't have any substantive physical or mental after-effects.  Oh, sure, I can't walk through a metal detector, I wonder and worry a little about magnets that seem to have become suddenly ubiquitous. And I was bitter about the ban on scuba diving.  But substantively - no physical or mental after-effects.

Last weekend I learned how to make paper.  I love to write; I love paper and pens and ink.  I love fountain pens.  I don't make many things; I made a few hundred jobs, I guess.  I make some contracts now.  But things - I don't make many things.  But I made paper for two days.  Four years ago, I would have scoffed at the idea.  I would have said no to making paper.  I am pragmatic by nature - we can buy paper; there is no point to making it.  After two days of making paper, I have a few sheets I like and one I love.  I don't know exactly what I will do with it, but a fountain pen and some words will be involved.

I made paper.  And a man walking down the beach asked me to leave behind my book and walk with him. I said yes.  He asked for my number and I said yes.  Pre- SCA, I would not have; I would have wanted fingerprints or a mutual friend or some sort of background check, place of employment, license plate - something silly.    Now I just say yes.

I say no to things I don't enjoy. Things I would have continued to do out of a sense of obligation.  Or out of a desire to avoid feeling guilty.   Last year, service on a nonprofit board had become tedious and irritating.  Pre-SCA, I would have continued through my term.  Not now.  I quit mid-term.  My self-induced guilt has lost much of its power since the SCA. If it's not fun or meaningful or gratifying or important, I'm out.  I received a gift on September 5, 2009 and it's mine to keep.