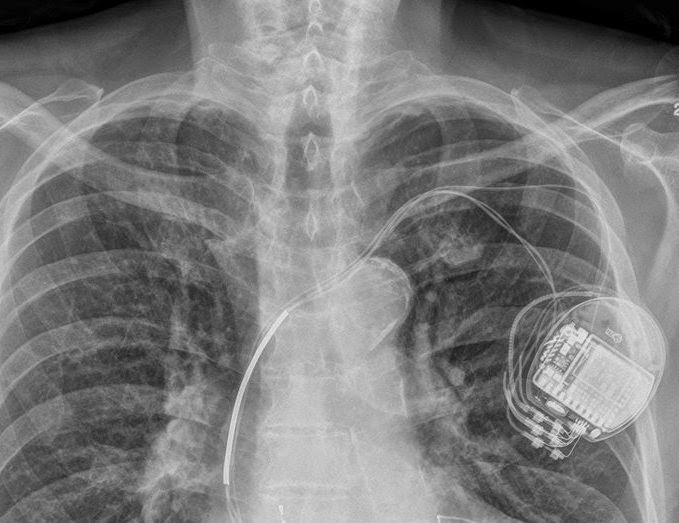 I recently saw Henry the cardiologist for our semi-annual chat.  I had a few questions for Henry, one of which was about Pilates and some scary sensations I have gotten in Skippy's neighborhood.  Skippy being the ICD, the implanted cardioverter defibrillator, the thing sitting in my chest wired to my heart.  Sitting there, laying in wait to shock me to smithereens if the need arises.

I love Pilates; I've been a regular for 7 or 8 months now.  But there are a few exercises and positions that I avoid.  They scare me - they produce odd sensations in my chest.  It feels like something 'funny' in the vicinity of the wires and leads that lace from Skippy into my heart.  The wires and leads are Skippy's appendages - sometimes Pilates creates something that feels like pulling on a lead.  That sounds relatively benign, but for a Sudden Cardiac Arrest (SCA) survivor with an ICD, it's terrifying.

Of course, SCA is a fear-spawner; it manufacturers fear.  Particularly in the first year, life was an onslaught of fears.  Skippy arrived with a great deal of baggage.  Bit by bit, month by month, you tame the fears one at a time.  Time works its magic and now, after Skippy's 4th birthday, a day with a new SCA fear is an anomaly.

But Pilates.  In doing Pilates, one stretches in some bizarre positions, pulling this way and that.  And the frightening sensation was a pulling - from inside the chest wall.  I could envision Skippy's becoming detached from something important and in a flash, there it was - that special, unique, icy SCA terror was back.  Nothing quite like it.

So I asked Henry.  He told me there were only three things I could not do - gain weight, smoke and resume scuba diving.    That I should think of the 'pulling' sensation as akin to muscles being asked to do more than they have done  -  there may be temporary discomfort and then the muscle reaches a new level of strength.  I get that; I understand that picture; I understand sports and muscles -- and I was more than mildly relieved.  Yes,  I could do everything in Pilates, but more important - one more fear wrestled to the ground.

Then Henry went on to paint a new picture.  He said that after 4 years, the ICD (he won't refer to Skippy by name) --  the ICD is no longer just sitting in the chest wall - it has been "incorporated" into my body.  Tissue has surrounded it. I'm not sure which word he used as he described it, demonstrating with his hands.  It was enmeshed or encased or encapsulated or integrated or something .  My body has surrounded Skippy.  It's a new, odd, freaky, and ultimately reassuring mental image.  I couldn't remember Henry's word so I choose 'embraced'; my tissue and my heart have embraced Skippy.

So there you have it - Skippy and I are one forever.  Until death do us part.
Posted by Marty at 5:42 PM